by Carl Balingit on October 12, 2015
in Chinese Medicine, Food Therapy 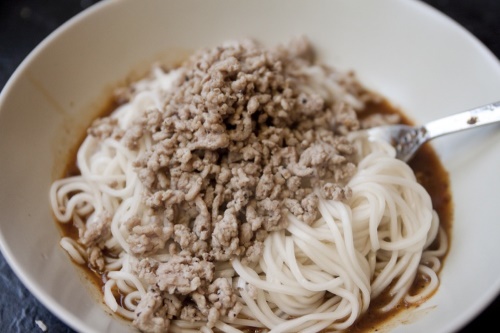 It’s the tongue-numbing, taste-bud-tickling action of chuan jiao that I seek. To revive my interests and vanquish this listlessness caused by unseasonable heat.

Chuan jiao is both spice and medicine. It’s an essential ingredient in Dan Dan Mian, and gives a thrilling sensation to lips and tongue. As medicine, it strengthens digestion and also kills parasites. It is mainly used for roundworms, but has been effective against pinworms and schistosomiasis. Though, you should avoid this herb for most inflammatory conditions along your digestive tract, for it will act as a hot irritant.

Beyond the noodles, a broth made from chuan jiao can be used as a wash to treat eczema.

Chuan jiao was banned by the FDA for its potential to transmit citrus canker, a bacterial disease. The disease does not affect humans. However, it can wreak havoc on citrus crops. Be happy that the ban was lifted in 2005. So scavenge your Asian markets, and pick up this herb.

There are several recipes online, with appetizing pictures of modifications. In my opinion, the more basic, the better—like that found in Sichuan Province, China.

I have tried renditions at several San Diego restaurants, but they seem to favor stir frying the noodles in peanut oil. Consequently, it doesn’t come close to satisfying my craving.

This is the best appetizing picture I could find (for free) that most closely resembles the authentic Sichuan comfort food. Except that the noodles look more like regular spaghetti. And the pork looks dry.

…Just fly over to Sichuan Province.

Previous post: The Cassia Tree–Material for Your Medicine Cabinet