by Carl Balingit on September 2, 2013
in Chinese Medicine, Food Therapy 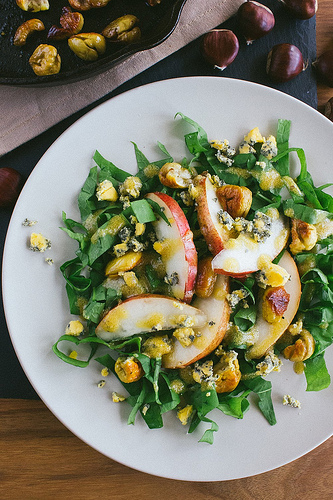 Climate impacts our health, and food may be used to counteract its adverse effects. Low relative humidity can lead to dryness of our skin, and mucous membranes along our respiratory pathways, as the air draws moisture from our bodies. In Chinese medicine, the lung system is not only related to respiration but also to the functioning of our skin. (Our skin is the first line of defense against pathogens; acts as an organ of elimination to excrete toxins; and regulates body temperature via the conduction and radiation of heat.) Traditionally, autumn is considered arid, thus calling for foods that moisten dryness and benefit the lung system.

Chinese dietetics is the science of food selection in our diet, which Pang (2011) dates back to the Zhou Dynasty (1046-256 BCE). It is not wholly based on an analysis of the nutritional content of food, as in Western nutrition. Rather, it categorizes nutritive qualities based on the effect of food (and herbs) on our bodies after it is consumed. This accounts for the nature of food (e.g. cold, hot, yin, yang) in Chinese medicine, which is a qualitative measurement instead of quantitative. It indicates the physiological direction the body will move in, as a result of eating particular foods. For example, hot-natured foods tend to increase metabolic rate and body heat whereas cold-natured foods tend to cool the body. Yang foods will dry or expel excess fluids; yin foods will generate blood and fluids.

In Chinese medicine, the criteria for food selection also include the seasons. Here the philosophy of eating is consistent with that of living—we should live and eat in harmony with our environment. Therefore the food we eat—to a certain extent—should be seasonal. This is one of the benefits of the slow-food and locavore movement, and the rising popularity of farmers’ markets: it helps ensure that we eat in accordance with the seasons, and the region we reside in. In other words, eating local promotes spatial and temporal harmony.

That, my friends, is the basics of Chinese dietetics. But—as in all things—the utility of this knowledge rests on an understanding of its context, and we should account for regional factors regarding advice on seasonal changes.

The Chinese medicine tenet that we should eat foods that moisten dryness and benefit the lung system, in autumn, is based on a long-established ‘system of correspondences.’ It signifies a resonance between our bodies’ internal environment and nature. By comparing patterns in nature to patterns in physiology and disease, the developers of Chinese medicine tabulated a correspondence between autumn and lung dryness.

Autumn, dryness, sadness, acrid, skin, body hair, nose, whiny, organized, metal—these are seemingly disparate words that all correspond to the lung system. The words are linked because they describe effects on lung function, manifestations of its functional status, or characteristics of a person with a ‘lung constitution.’ The exception is the latter—‘metal’—which is a metaphorical term used to analogize lung function. However let us not digress into 5-element theory (metal is one of the elements), but rather let us stay on the topic of autumn dryness.

I was contemplating the seasonal tenets—particularly the advice pertaining to autumn. I wondered if autumn is dry in every part of the world, and if autumn is truly drier than other seasons. I figured that if the answer to either turned out to be negative, then such advice should be relegated to clinical dogma.

To answer these questions, my first step was to review climate data published by the National Oceanic and Atmospheric Association (NOAA) (http://www.ncdc.noaa.gov/). Their data comes at a cost, so I opted to pull the summaries for free from the Current Results website (http://www.currentresults.com/Weather/US/humidity-by-state-in-fall.php). I organized the summaries of average relative humidity in the United States below, by season. (Highlights are my own, marking the highest and lowest relative humidity per season.) 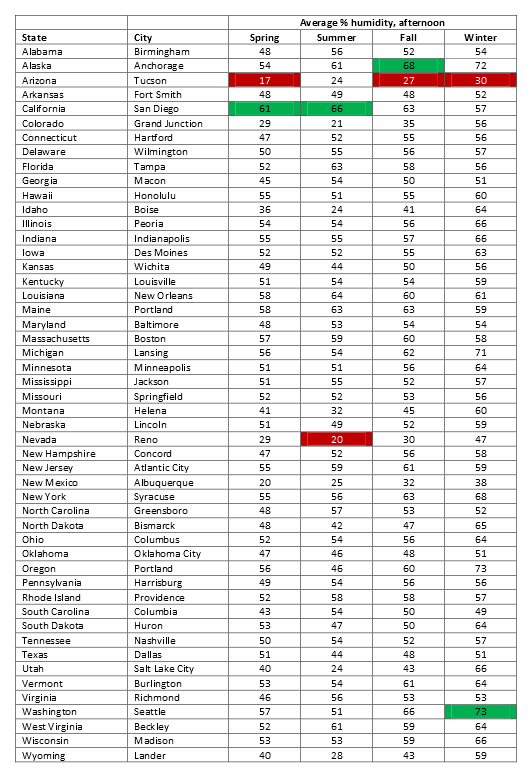 The data above is limited because few weather stations measure humidity. So the cities above were selected to represent the average for the entire state. Yet the statistics are still revealing, and following are some interesting facts about seasonal relative humidity in the United States:

From the facts, it is apparent that climatic dryness is regional. So far, the recommendation to eat moistening foods in the fall is starting to look like dogma. However, thoroughness requires that we also explore the impact of human behavior as seasons change. For we reside within dwellings equipped with climate control.

Obviously, weather data only reflect natural outdoor climates. However, most people use climate control to adjust the comfort of indoor environments. Though Chinese dietetic principles predate the advent of HVAC systems, fire used in ancient times for heating households and cooking had the same effect of modern heaters in drying out the air.

It is difficult to determine whether the Chinese dietetic maxims only account for natural climate, or factor in human behavioral changes throughout the seasons. But if they did account for human behavior, then one would expect winter—rather than fall—to be the most arid season as many a hearth or thermostat are set on high.

The United States vs. China

So far we have considered climate data for only those living in the United States. Based on the regional variations in humidity in this country, we can expect comparable variations around the world. A good model for comparison is China, since that is where this dietetic advice on seasons originated.

The NOAA also provided data for China, via its Air Resources Laboratory (ARL) (http://www.arl.noaa.gov/). Its article in the Journal of Climate (Wang, 2001) presents data that not only shed light on recent humidity levels in China, but also address climate change. Climate change is pertinent because the dietetic advice discussed here was developed during a time that possibly experienced different weather than today. According to the ARL, China has a seasonal cycle of moisture controlled by the east Asia monsoon system. In the period of 1951-94, there is evidence of an overall increase in atmospheric moisture content in most of China by several percent per decade. However, there has been a statistically significant decrease in relative humidity in the northeast region. [Temperature affects how dense the air is, which affects how much moisture the air can hold. Because of the temperature factor, there can be an increase in atmospheric moisture (specific humidity) while relative humidity decreases. Relative humidity indicates how saturated the air is, relative to how much moisture the air can hold.]

Wang (2001) details variations in humidity throughout the day. However, since dietetic principles are concerned with the sustained effect of weather on human physiology, broad values for humidity should suffice. The data show that average humidity is lowest in the northern and western regions of China. Within these regions, the driest season (in terms of humidity, not rainfall) occurs in spring. Wang states that the regional variability of average humidity throughout China is remarkably similar to that of the United States at comparable latitudes.

A final factor to consider is that the effect of atmospheric moisture on our health may be influenced by idiosyncrasies—our hydration habits, activity levels (that may lead to excessive loss of fluids via sweat), and the efficiency of our internal temperature regulating systems (i.e. breathing, blood circulation, sweating).

When considering advice, it is important to also consider the context in which that advice was given. Such is the case in Chinese dietetics. While the dietetic principle of counteracting dryness with moistness may be valid, it should not be applied in a general fashion by assuming that autumn is a universally dry season that requires the consumption of moistening foods. For, as we have seen, humidity—which affects how much moisture is drawn from our bodies—can vary greatly by region.

Although dietetic principles may not always be applicable, they were likely appropriate at the time and place in which they were developed.

While there are weather instruments to measure temperature, air pressure and humidity, ultimately your body is the gauge. If you are suffering from itchy skin, dry nasal passages, thirst, and nose bleeds—regardless of the season—consider adding moistening foods to your diet. Using your body as a gauge, you can account for other variables such as personal idiosyncrasies and indoor climate control. If it is decided that you do need moistening foods, then these ingredients should be increased or added to your diet:

* Traditionally, it is the root that is used to generate fluids and alleviate thirst. The Chinese name for kudzu root is ge gen.

Next post: Benefit of Herbs to Invigorate Blood in Cancer Therapy