by Carl Balingit on March 3, 2013
in Chinese Medicine 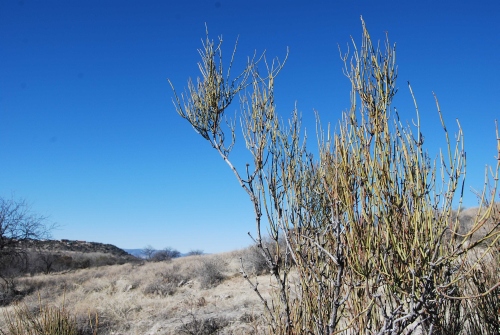 On a recent trip to Sedona, I saw ephedra viridis (aka Mormon tea) growing 25 miles south at the Montezuma Well—an area inhabited by the Sinagua people until about 1425 AD.

Ephedra is an herb that has been traditionally used by several cultures–including the Sinagua–to treat a variety of diseases. However, its use in dietary supplements was banned by the FDA due to death reports from the herb’s misuse in weight-loss products.

While the FDA restricts ephedra, the Natural Resources Conservation Service (NRCS, under the auspices of the USDA) states that e. viridis “is still highly valued as a beverage today by many tribes and it is utilized as a tonic and blood purifier.”  [ref. monograph, http://plants.usda.gov/plantguide/pdf/cs_epvi.pdf]

Two related ephedra species—e. equisetina and e. sinica (aka ma huang)—are used in Chinese medicine to treat cough, asthma and edema. Though ma huang is banned from use in dietary (herbal) supplements, the raw herb can still be prescribed by a licensed Chinese medicine practitioner. That is, if the practitioner can find it [hint: Sonoran Desert]. Actually, the plant monograph (referenced above) lists the natural growth distribution of e. viridis in the United States, encompassing the southwest region.

While technically legal to use by licensed Chinese medicine practitioners, ma huang is currently subtracted from classical Chinese patent (i.e. ready-made) formulas. This is because patent medicines are regulated as dietary supplements whereas a made-to-order raw formula is considered an herbal prescription within the scope of Chinese medicine practice.

To be sure, ephedra viridis is not the exact species traditionally used in China. However, it would be interesting to compare.