The Chinese Medicine of Pork Vermicelli

by Carl Balingit on July 16, 2012
in Chinese Medicine, Food Therapy 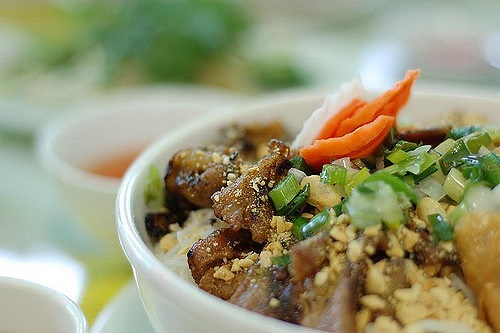 Pork is an animal protein. Therefore—in one sense—it can be considered a yang-natured food. However, compared to red meat, it has a yin-nourishing quality. So in the grand scheme of meats, it can be called yin. But when you marinate it in some wicked flavors, and then BBQ it… it becomes mostly yang.

I’m a big fan of bún, a Vietnamese rice vermicelli dish. The noodles aren’t exactly chilled, but they are still refreshing in a way. And it’s a nice complement to top it with a well-marinated meat. I prefer pork or chicken.

I ate such a dish this afternoon. The last time I ate it, I skipped all the accompaniments and stuck to just the pork and bún. This resulted in a postprandial belching up of something fierce–Stomach fire and rebellious qi–that lasted for several hours. This was due to heat from the spiced barbecued pork entering my stomach. While one could say that such a rumbling aftermath signified a satisfying and manly meal, it nonetheless was an indication of a Stomach system imbalance.

In contrast to my previous dining adventure, I cleaned my plate this afternoon. I ate it all, which means I consumed the mandolined fresh cucumbers that came along. The cucumber is essential, for it is a cool-natured food that offers adequate resistance to the onslaught of Stomach fire from a dish I love so much.

You could say that my digestion of today’s Vietnamese fix was smooth, because the dish was well-designed from a Chinese medicine perspective–a balance of water and fire. The pleasure of this dish prompted me to run menus through my head, trying to recollect other perfectly balanced meals I’ve consumed. And I think I’m on a Tai Chi food mission to find other well-designed dishes around town.

Another good place to get well-designed Asian cuisine is Saffron (Thai food)—Su Mei is a genius.