by Carl Balingit on January 31, 2010
in Healthy Spaces, Nutrition 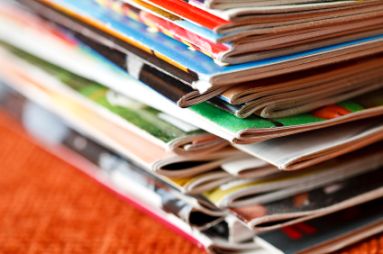 With each New Year, we tend to think of fresh starts. It’s a time to shed bad habits, try our best at a clean slate, and clear clutter from our lives.

Clutter bogs me down. So, I try not to hold onto too many things. But I do have a habit of collecting magazines, journals, newsletters… any written word with the promise of making me smarter. I even save brochures. And most of everything is pegged to be read “later”.

I used to think I was making an honest effort to become a sort of Renaissance man.  But after plumbing the depths of my sub-conscious, I realized the truth wasn’t nearly as romantic. I just had an unrealistic desire to know all things.

Who am I to have such a grand desire?

I’m definitely not a library.

So, I freed my mind of all the things I could have known. Yes, I threw out a big chunk of knowledge. But at least it was all recyclable.

With my living space fresher and my thoughts clearer, I decided to call Mom to find out what she might have cleared away.

My mom cleared out all the celery from her produce bin. Yep. She didn’t need it anymore.

She had heard that celery had no nutritional value. So, with the analytical mind of a Vulcan she deduced that there was no point in ever eating it again.

However, some foods have other attributes that add to their healing power, beyond just the typical “nutrients”…

Because celery is adept at “cleaning” our blood, it’s an ideal complement to the standard American diet.

When we break down the food we eat, it’s called digestion.

When we can’t break down the food we eat – because of over-consumption of meat, processed foods and sugars (the typical diet) – then bacteria in our gut breaks it down instead. That’s called fermentation.

Fermentation produces toxins and acid that can lead to inflammation and symptoms like gout, arthritis, headaches, and allergic reactions. That’s the short list of symptoms, but it should be enough to give you the picture.

The Joy of Celery

Celery helps neutralize the toxins produced by fermentation and the standard American diet. It has minimal nutrients but lots of healing power.

So, Mom… let the celery back in!